What happens when technology leaves you with an unexpected gift? You grab it and go!

This morning my two cats, Jenny and Rameses, started playing with toys that my mother-in-law had put in our Christmas stocking for them. Tootsie’s toys never fail to please! I watched as they inspected the toys, taking pictures with my phone.

The pictures produced some shocking results and were such fun that I thought I’d craft a story around them. Here goes:

Santa had left an extra gift.

The tree stripped of its sparkling lights and sentimental ornaments had been dragged out onto the snow-covered deck to shelter the birds. In its wake were left a trail of prickly green needles and a single, unopened package, topped with a silky red bow and a note stamped with a paw print reading, “Love from Santa, Rudolph and the gang.”

Filled with a variety of plush and plastic toys, this unassuming package might have been ignored altogether were it not for the intoxicating scent of catnip which soon caught the attention of a matronly Torti.

Gently pawing the package Jenny pressed her face close to it, filling her nostrils with the sweet scent of catnip. The paper crinkled, the scent grew stronger and soon paws and claws were ripping at the paper. Shreds of red and green flew about as the treasure trove was exposed.

Pushing past the scraps of paper, Jenny poked and prodded each toy until she found the one of her desire. Rubbing her face against it, she erupted into a frenzied purr and was soon rolling on the floor in catnip ecstasy.

It wasn’t long before Rameses caught on. Galloping in from the kitchen, he stopped short at the entrance to the family room, his long tail switching to and fro. The sleek ginger quivered as if to say, “What’s this? New toys? Playtime! All mine!” 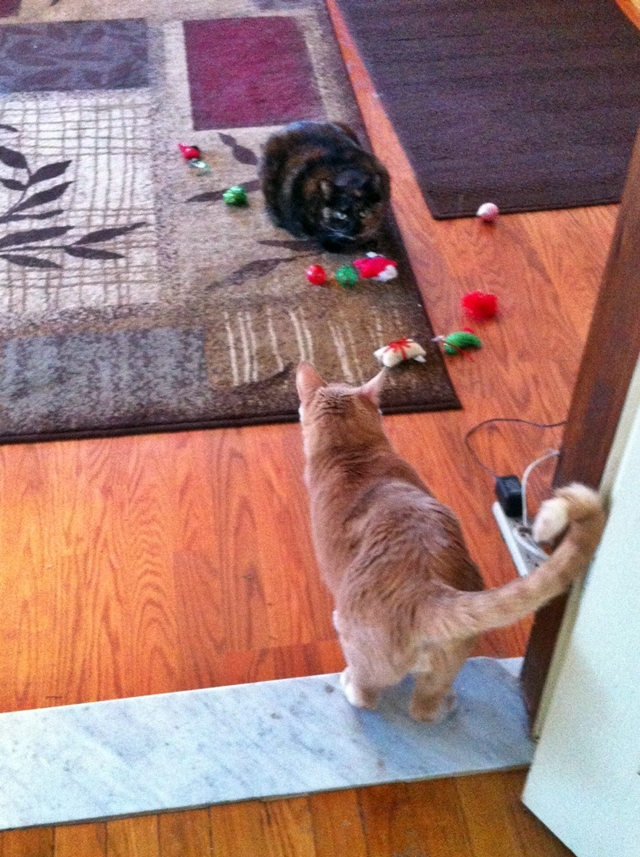 The purring instantly ceased at the commotion and Jenny crouched close to the floor next to the catnip toy, folding her delicate paws under the portly body. Her eyes remained yellow but she never took them off of Rameses. 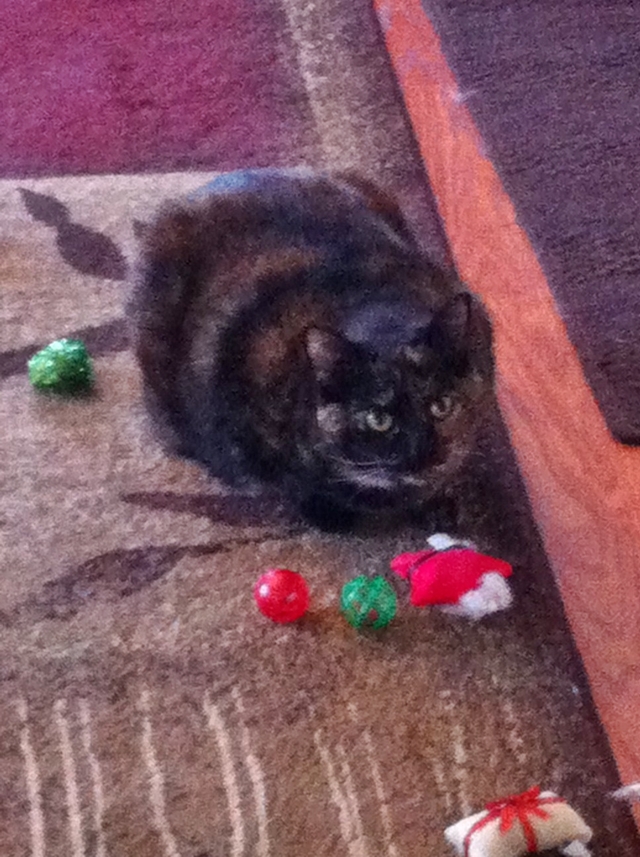 Rameses circled the toys and sniffing audibly, spotted the catnip treasure. Jenny rose and quietly stalked the young male, continuing to stare him down. He sat still and returned the stare.

It was then that his eyes flamed as balls of fire! Jenny’s own eyes instantly transformed into immense black saucers as she turned away, unable to bear the heat of his gaze. 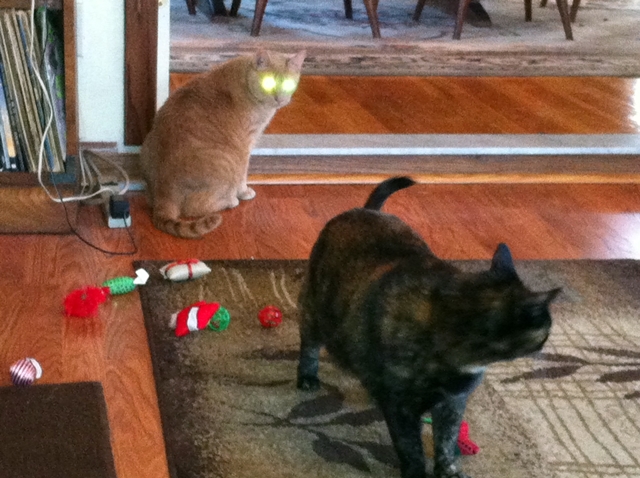 Still, she didn’t leave, the alluring scent of the catnip fresh on her mind.

Jenny turned back towards Rameses, crouching again on the floor next to the toy, paws folded under her body.

Sitting perfectly still, her eyes too began to flame …

Oh no! How will this story end?

That’s up to you! Suggest an ending with your comments.

4 thoughts on “Pictures, kitties and toys to fuel the imagination”